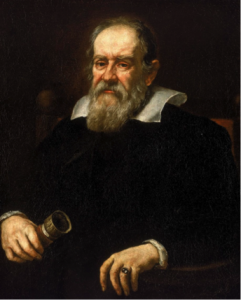 Albert Einstein referred to Galileo Galilei, more commonly known simply as Galileo, as “the father of modern physics, indeed, of modern science altogether (McNeese, 2006, p. 5).” This is a great compliment to the 16th Century scientist but one that is well deserved. With studies on motion, measurement, and the stars, as well as a tendency to question authority, Galileo made one of the greatest contributions to science of anyone in history.

Early life
Galileo was born on February 15, 1564, in Pisa, Italy to Vincenzo and Giulia Galilei. Although both parents were from noble families, the Galilei family was not wealthy, living on what Vincenzo earned as a lute player and music teacher (Demuth, 2015). Six more children followed (Reston, 1994) and although only four, including Galileo, lived to adulthood (McNeese, 2006), Giulia was never satisfied with their social status. Despite their lack of money, Vincenzo was determined to give his eldest son the best education possible (Demuth, 2015).
At age 11, he was sent to an abbey in Vallombrosa to be educated by the monks (Heilbron, 2010). At 15, he declared his intention to become a monk himself but was removed from the school by his father who claimed the monks were not looking after his son’s health (Reston, 1994). The truth was that he wanted Galileo to become a doctor and have the life Vincenzo could never afford. Following his father’s wishes, Galileo entered the University of Pisa in 1581 as a medical student. However, he was much more interested in mathematics and often neglected his medical studies (Demuth, 2015). With the help of court mathematician Ostilio Ricci, Galileo convinced his father to let him study math (Reston, 1994). A tendency to argue with his professors, however, earned him a bad reputation and the nickname ‘The Wrangler’. He left the University without a degree in 1585 (Demuth, 2015).

Scientific Discoveries
Galileo’s first major discovery came while he was a student at the University of Pisa. While sitting in Mass, he watched a swinging lamp and observed that each swing seemed to take the same amount of time. Using his pulse as a timekeeper, he discovered that this was true (Fermi and Bernardini, 1961). At home he performed experiments with pendulums of his own and found that each swing took the same amount of time, moving faster when the arc is longer and slowing as the arc become shorter. To change the swing time, one had to lengthen or shorten the chain on the pendulum (Demuth, 2015). With this knowledge, he invented a way to measure a person’s pulse by varying the chain length, which he named the pulsilogia (Reston, 1994).
After leaving Pisa, Galileo moved to Florence where he earned a meager living as a math tutor and lecturer (Demuth, 2015). He also began to study the work of Archimedes and expanded on the concept of using water to measure weight and density (Heilbron, 2010). He invented a balance in which one side was in water and the other in air and was more precise than previous weighing devices. His first book, entitled The Little Balance was about this invention (Demuth, 2015), now know as the hydrostatic balance (Fermi and Bernardi, 1961). 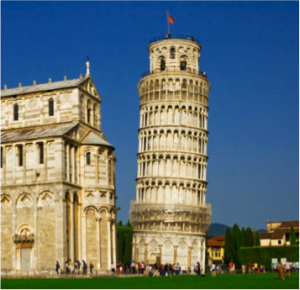 In 1589, Galileo was offered a position as a professor of mathematics at the University of Pisa, despite having left there without a degree four years earlier (Demuth, 2015). Once there, he continued challenging accepted theories, thrilling his students and angering his fellow professors. This friction with the rest of the faculty caused him to resign in 1591 before they had a chance to fire him. During his time in Pisa, Galileo allegedly performed one of the most well-known scientific experiments of all time. It is said that he dropped two spheres with equal densities but different masses from the Leaning Tower of Pisa. This was done to demonstrate that their time of descent was influenced only by their air resistance (a properly linked to density) and was independent of their masses. He believed that all objects experienced the same pull of gravity towards Earth. This was in contrast to the current notion that heavier objects fall faster than light ones. History says that both objects hit the ground at the same time. Whether the story is true or not is unknown, however, it has been shown many times since then that if air resistance is removed (like in a vacuum chamber or on the Moon), any two objects will fall at exactly the same rate.
A new position at the University of Padua soon came along. One that was both more accepting of his progressive ideas and better paid. He would serve as the head of the mathematics department for 18 years. While at Padua, Galileo learned of Dutch lens maker Hans Lippershey’s spyglass. Lippershey had combined two lenses inside a tube to create an instrument that would make an object in the distance appear four times closer. Galileo immediately set out to improve this invention, teaching himself to grind glass and creating an even more powerful telescope. Once he had a tool that could magnify by 20-30 times, he turned his telescope to the sky. 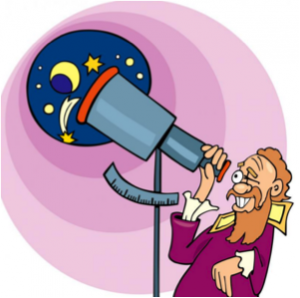 When he first aimed his telescope at the heavens in 1609, Galileo discovered that the constellation Orion, which was believed to be made up of nine stars, actually contained at least 80 more. He also found that there were moons orbiting Jupiter (Demuth, 2015). His critics claimed that the appearance of these satellites was caused by flaws in the lenses and “vapours in the atmosphere (Sharrat, 1994, p. 18).” They were even more disturbed by his observations of the planet Venus, whose phases he tracked over several nights. He asserted that these changes not only proved that Venus orbited the Sun but that it supported the work of Nicolaus Copernicus who, in 1543, had said that Earth was not at the center of our solar system, but that it and all the other planets, revolved around the Sun (Demuth, 2015).

Galileo versus the Catholic Church

The notion that the Sun was at the center of the universe was considered heresy because God had placed man on Earth so it must be the most important body and thus, the center of everything. As a lifelong Catholic, Galileo was horrified by the charge of heresy and tried to convince members of the Church that his discoveries were both correct and in keeping with Church doctrine. He was successful for a while, but in 1616, the Inquisition banned the teaching of Copernican theories. Galileo turned his attention to his newly invented microscope instead.
The election of Pope Urban VIII, a known supporter of science, in 1623 gave Galileo new hope. Urban did not lift the ban on teaching Copernican theory but gave permission to write about it in a hypothetical manner for the sake of scholarly debate. Galileo took up the challenge and wrote a narrative in which three friends debated the topic. One supported Copernicus, the other Aristotle and the third abstained. The Dialogue Concerning the Two Chief World Systems was completed in 1630. Unexpectedly, the pope opposed the book and Galileo was summoned to Rome to stand trial for heresy.
He was found guilty of supporting Copernicus, possibly because he had not so subtly named the Aristotle supporter in his Dialogue Simplicio. To avoid torture and execution, he was forced to renounce Copernicus and was placed under house arrest for the rest of his life. This punishment proved to be tolerable as he had many visitors and continued to conduct experiments. Galileo died on January 8, 1642, at age 78 (Demuth, 2015).

church did not lift its ban on teaching Copernicus and Galileo until 1835 (Demuth, 2015). On October 18, 1989, NASA launched the Galileo orbiter to study and its moons. During its fourteen-year mission, the Galileo discovered a saltwater ocean under the surface of the moon Europa, visited two asteroids and captured infrared images of the clouds around Venus. It was crashed into Jupiter on September 21, 2003, to avoid colliding with Europa (JPL, n.d.).