Organic is a HUGE industry at the moment but is it better? There are a lot of opinions out there and unfortunately, most (if not all) are biased one way or another. Let’s try to break it down scientifically. At the bottom of the page, I’ve included an awesome podcast episode from Science Vs. I highly recommend you listen to it. 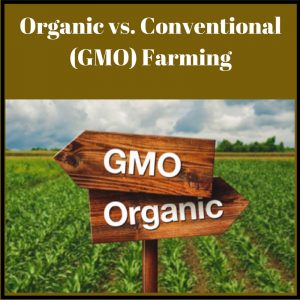 What is conventional farming?
A conventional farm (sometimes called a GMO farm) uses seeds that have been genetically modified to grow plants that may have a faster growth rate, higher yields (produce more), are pest and disease resistant and/or possess sweeter fruits. They may also use synthetic pesticides and fertilizers. These crops may be grown for consumption or they may be grown for a specific use. An example of a crop being grown for a specific use is low-linolenic soybeans. These soybeans may be grown for a company that is looking to make oil from the soybeans but do not want it to require hydrogenation. Hydrogenation is a chemical process that turns liquid oil into partially solid oil.

What is organic farming? 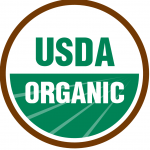 Organic farming does not use seeds that have been genetically modified, synthetic (human-made) pesticides, or synthetic fertilizers. They often use crop rotations to improve and maintain soil quality, natural pesticides and other organic methods to help their crops grow. Organic pastoral farmers cannot use antibiotics or hormones, and the animals must be fed an organic feed.
What does it mean for a product to be certified organic?
If something is certified organic in the U.S., it means that the product has been grown, harvested (picked), and processed according to organic standards that are verified by the United States Department of Agriculture (USDA). To become certified, farmers must submit documents to the National Organic Program (NOP). The NOP then checks if the crops meet organic standards. This check is done annually.

Conventional Farming vs. Organic Farming
Many people have very strong opinions on which method of farming is better. Some say that organic farming is better because it is healthier, tastes better, farmers do not use pesticides, and it is better for the planet. Others disagree but what do the facts tell us? Let’s look at each individually.

Organic farming also comes with a price, literally. In a study done in 2015 by Consumer Reports, they found that after comparing the price of organic and conventional foods, organics cost and average of 47% more.

This is not to say that conventional farming is perfect. Conventional farming often results in the soil being malnourished and the over spraying of pesticides can lead to resistance in the pests, creating ‘super bugs’ that can’t easily be killed. The resistance in pests could lead to the development and usage of a stronger pesticide, which could cause side effects in the animals and people that consume the product.

As promised, here’s the Podcast I mentioned. You’re going to love it.

Lastly, how about the chemical nature of the food we eat. Are organics less full of those harmful, hard to pronounce chemicals? ASAP science says ….